It was a beautiful Indian summer day 117 years ago in Geneva, Switzerland, when Empress Elisabeth of Austria left the Hotel Beau-Rivage, where she spent a night incognito, to hurry to the steamship “Genève”. On this Saturday, 10 September 1898, Empress Elisabeth was assassinated by Luigi Lucheni, an Italian anarchist. The tragic event was well covered in the coeval press, as Elisabeth of Austria – also known as Sisi (not “Sissi”, like in the movies) – was a mysterious fairy-tale princess. She was obsessively concerned about her beauty and spent several hours a day just to groom her knee-long hair. Sports and diets were her passion, and she loved to hike and to ride, but was so slim that she suffered from famine oedema.

As a Bavarian princess who enjoyed a happy and unstrained childhood, the extremely strict court life in Vienna was a burden Elisabeth never got used to. She started to travel and wrote melancholic poems, and after the tragic death of her only son Rudolf she disappeared nearly completely from the Austrian court.

When Elisabeth was sixty years old, she followed an invitation from the Rothschild family to Geneva. Together with her lady-in-waiting, the Hungarian Countess Irma Sztáray, she walked the short distance between the hotel and the pier without her entourage, despite warnings of possible assassination attempts.

Luigi Lucheni, a poor man full of rage for the upper nobility, ran towards them as they walked by on the promenade and stabbed Elisabeth directly into her heart with a self-made weapon composed of a small sharp file. But neither the empress nor her lady-in-waiting realised what really happened. Thinking of a robbery attempt, they went on boarding the ship. A few minutes later, Elisabeth lost consciousness and died. 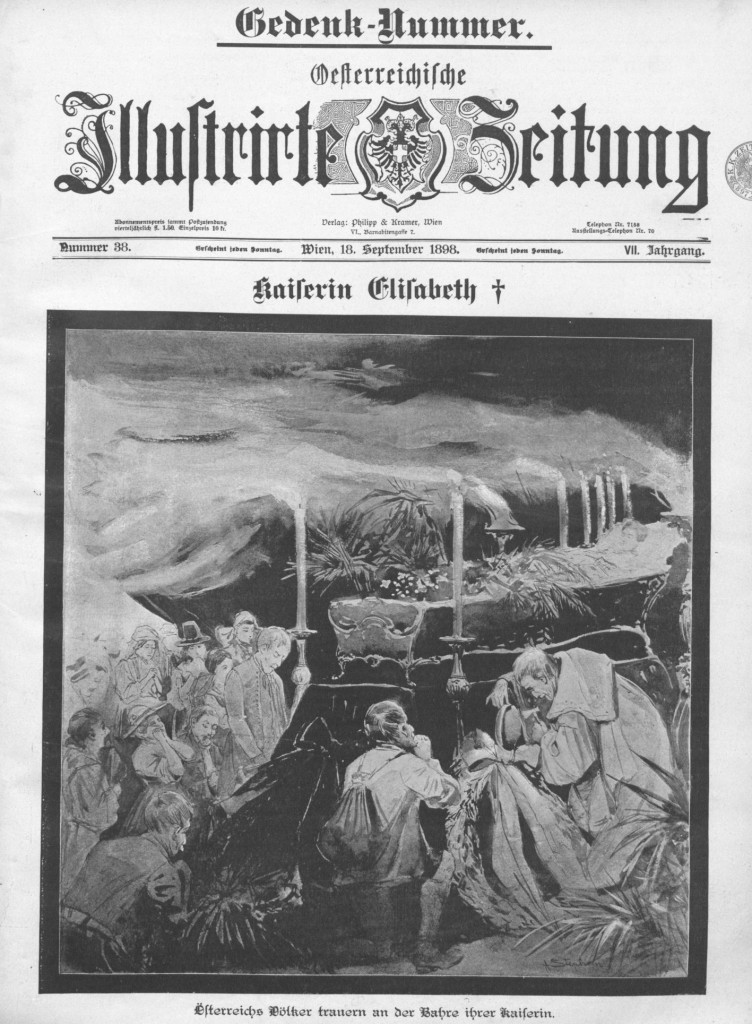 Needless to say, the public, especially in Austria and Hungary, was shocked and in deep mourning.  A lot of newspapers were published with a black mourning border, like Der Burggräfler or Meraner Zeitung. There were long extra issues about the life and death of Empress Elisabeth, for example this broadly illustrated Österreichische Illustrierte Zeitung. Some followed Elisabeth’s passion for poetry and wrote own poems like Die Bombe or Pusterthaler Bote, the Weltblatt just published her last picture (it shows her in her early thirties, she wanted to be remembered young and beautiful, so she refused to sit for any portraits or photographs later on). Less emotional and without huge headlines were the reactions in Prussia, where Berliner Tageblatt newspaper articles focused on the assassin Lucheni and detailed descriptions of the events in the Neue Hamburger Zeitung. The European press also covered the news extensively, just find some examples in French La Croix and Le Martin, La Unión Católica in Spain, the Allgemeen Handelsblad in the Netherlands and  also overseas colonial newspapers reported, like Sumatra-courant.

Elisabeth’s body was brought back to Vienna, where her funeral cortege followed her on 17 September 1898 to the tomb of the Capuchins (get an impression at Österreichische Illustrierte Zeitung). Her assassin Lucheni was caught and confessed immediately. He was brought to Geneva court on 11 November 1898, where he was incarcerated for life, what Luigi regretted a lot, as a death penalty would have had been much more catchpenny. During his process Lucheni declared that he came to the decision to “murder the first high-born person” that he would meet in Geneva (e.g. Hamburger Anzeiger, 12 November 1898), it was just a coincidence that he found out about Elisabeth.

Elisabeth of Austria was one of the first true European citizens, not so much because she was Empress of Austria, Queen of Hungary and Queen consort of Croatia and Bohemia, but because she spent most of her life travelling and deeply loved all the miscellaneous peoples and cultures. She seemed to be a fairy-tale princess, with the undivided love of her husband Emperor Franz-Josef and a paradigm for beauty. Yet this was not the life she was born to live and she tried to break out of her golden cage her whole lifetime.

32 Replies to “The assassination of Empress Elisabeth of Austria”