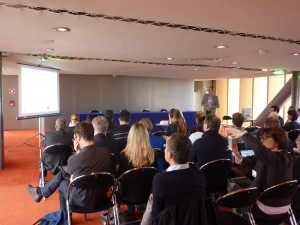 The project meeting at the National Library of France (BnF) was the closure and internal review of the first twelve months of the project. All work package leaders presented the work that had been done up to month twelve and the outlook for the coming year. Project partners were inspired to give their input for the following year. The General Assembly that gathered at the annual meeting took decisions on a number of points that will help the project proceed as well as improve the decision making process of the project in the coming year.

In the first year, the project had to build up its workflows, technical processes and datasets for refinement of digitized newspapers content, quality assessment, metadata model for aggregation and the presentation of the digitised newspaper content. A dataset for refinement was developed and in addition to that a specification of requirements for OCR and structural refinement services for digitised newspapers in Europeana. Evaluation profiles for use scenarios were developed for quality assessment.  A survey was undertaken to identify and analyse all newspaper collections digitized by national, research and public libraries inEuropeby 2012. The different metadata models of libraries currently in use for the digitisation of newspapers are being analysed to design and release a comprehensive meta-data model. This second year the project will continue to build on these achievements and disseminate the results to promote the project and bring more content to Europeana.

The official review from the European Commission will take place in Brusselson the 18th of March. This is the opportunity for the project coordinator and the work package leaders to show the achieved results of the past twelve months and the steps to take to continue and improve the results for the next year.

The upcoming events and achievements will be promoted on the website.