Every month we highlight one partner of the Europeana Newspapers Project. These articles will give you the ‘inside story’ about our partners, their specific role within the project and the various challenges that arise with the refinement and aggregation of historical newspapers. This month we feature the National Library of Poland.

The National Library of Poland acts as the central library of the state and one of the most important national cultural institutions. It was established in 1928 but its traditions date back to the beginning of the 18th century and are associated with the life and work of Andrzej Stanisław Załuski and Józef Andrzej Załuski. They created the first large public and national library in Poland which – under the name of the Załuskis’ Library of the Republic of Poland – was taken into the custody of the state after its founders died. Tragic lots of the library – covering the period from the partitions of Poland to the Second World War – became one of the symbols of cultural losses of Poland.Today the National Library is the main archive of national literature, a national centre for bibliographic information and an important methodology centre serving other libraries in Poland. It also acts as a large research library focusing on the humanities and is one of the most important centres digitising cultural heritage in Poland.

The National Library’s digitisation studio produces 80,000 scans per day. POLONA, a new version of the Polish Digital National Library launched in June 2013, now presents more than 150,000 digital copies of books, magazines, maps, sheet music, photographs and prints which can be viewed, downloaded and used in any way – free of charge and without any restrictions. The scanned objects are available in their original resolution, without any ownership marks.

The National Library’s collection of 19th – 21st century periodicals comprises over 80,000 titles. It includes periodicals published in Poland as well as newspapers and magazines published abroad but pertaining to Poland or published in Polish. As regards the 19th century press, the territorial range of the collection covers the areas which used to belong to Poland before the partitions and then (following the year 1794) to Prussia, Austria and Russia. Naturally there are publications in Polish (including Braille publications), but also periodicals in Russian, Lithuanian, Ukrainian, Yiddish, German, English and French.The National Library’s collection has for many years been complemented with microfilm copies of periodicals constituting collections of Polish and foreign libraries; at the moment, it holds the most complete collection of periodicals published in areas belonging to Poland as well as Polish communities around the world. 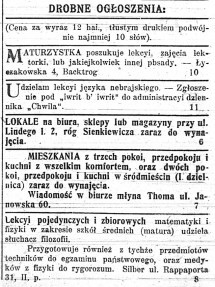 The library’s focus on making newspapers and magazines available results from the fact that the information contained in these sources of material gives one of the most complete pictures of the past. They document nearly all the aspects of life at a specific time and place: from important historical events, through to scientific discoveries and cultural phenomena, fashion, gossip and mundane activities in the tips and classified ads sections. By browsing old annual sets of newspapers, one can follow topical discussions regarding events which are now history and can discover long-forgotten meanings and aspects of these events. Put simply, we can see the past through the eyes of those directly involved in it.

As a partner of the Europeana Newspapers Project, the National Library will make available more than 100,000 high quality full-text scans of Polish newspapers from the years 1914-1921. These newspapers historical events as well as everyday life of a period so important to the history of Poland and Europe.

Our participation in the project coincides with work on our POLONA digital library´s new interface and with the start of the process of mass digitisation of periodicals contained in the National Library’s collection. The new online presentation of periodicals will be made available to users at the beginning of 2014. 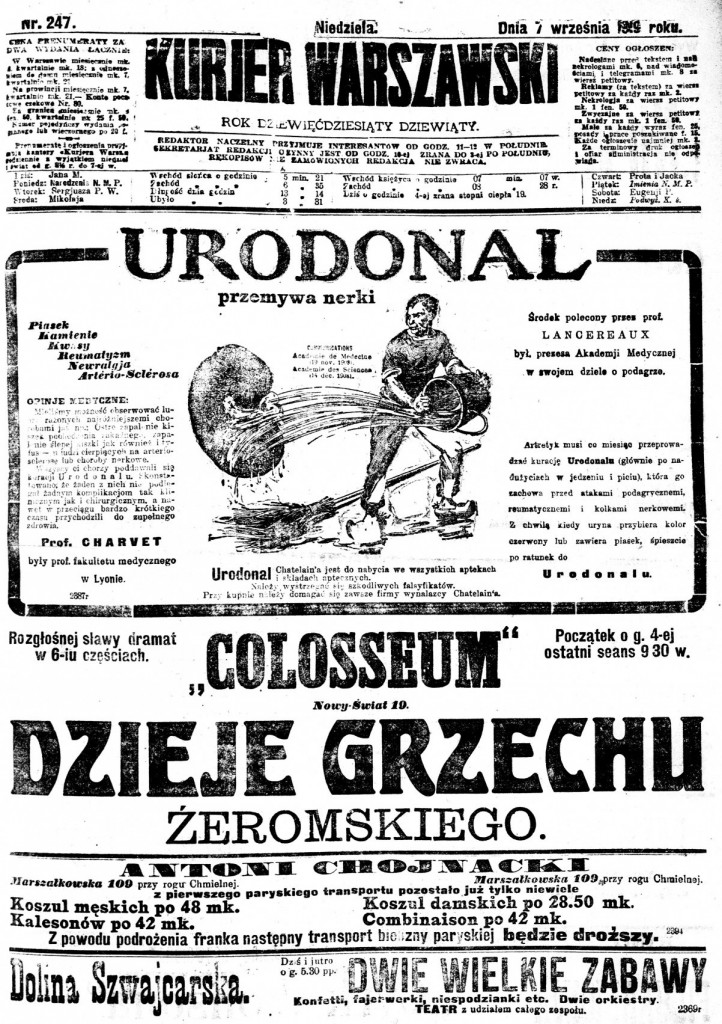 Among titles to be made available through the Europeana Newspapers Project, we have ‘Kurier Warszawski’ [‘The Warsaw Courier’] – a daily paper published in Warsaw from 1821 to 1939, one of the most important titles of the independent daily papers and one of the most modern daily papers published on the Polish soil. As of 1 April 1883, a morning and an evening issue were published. At the beginning of the 20th century this paper of the intelligentsia of Warsaw was typically referred to as ‘a public utility institution – as indispensable to the life of the capital city as its lighting system, its waterworks or its means of transport’.

Within the framework of the project, users will also gain access to Jewish periodicals published both in Polish and in Yiddish. For example, ‘Chwila’ [‘The Moment’] which originated from an initiative of the Central Jewish National Council established in Lviv in 1918. The periodical was published in Polish and covered issues arising with respect to relations between Jews and non-Jewish population. The first issue came out on 10 January 1919. The periodical continued to be published until the outbreak of the Second World War. It is a valuable material for historians, literary researches and theatrologists. It contains information about the activity of political, economic, social, cultural, sports and charity institutions affiliating Polish Jews.

The First World War also set its stamp on periodicals for children. For example ‘Moje pisemko: tygodnik obrazkowy dla dzieci’ [‘My magazine. Illustrated weekly for children’] published in Warsaw in the years 1902-1915 and then in the years 1918-1936, which perfectly illustrates the changed publishing profile enforced by the war. Before the First World War the magazine was primarily focused on education through entertainment; following 1914, it clearly aimed at acquainting and familiarising the young reader with the reality of an armed conflict. As the conflict escalated, the pages of the weekly magazine started to be filled with photographs of war activities and weapons used while short stories framing the publication (and often printed in episodes) more and more frequently referred to current events which authors would process as to adapt them to the age of their readers. The magazine is excellent for researching the morals and everyday life during the war. 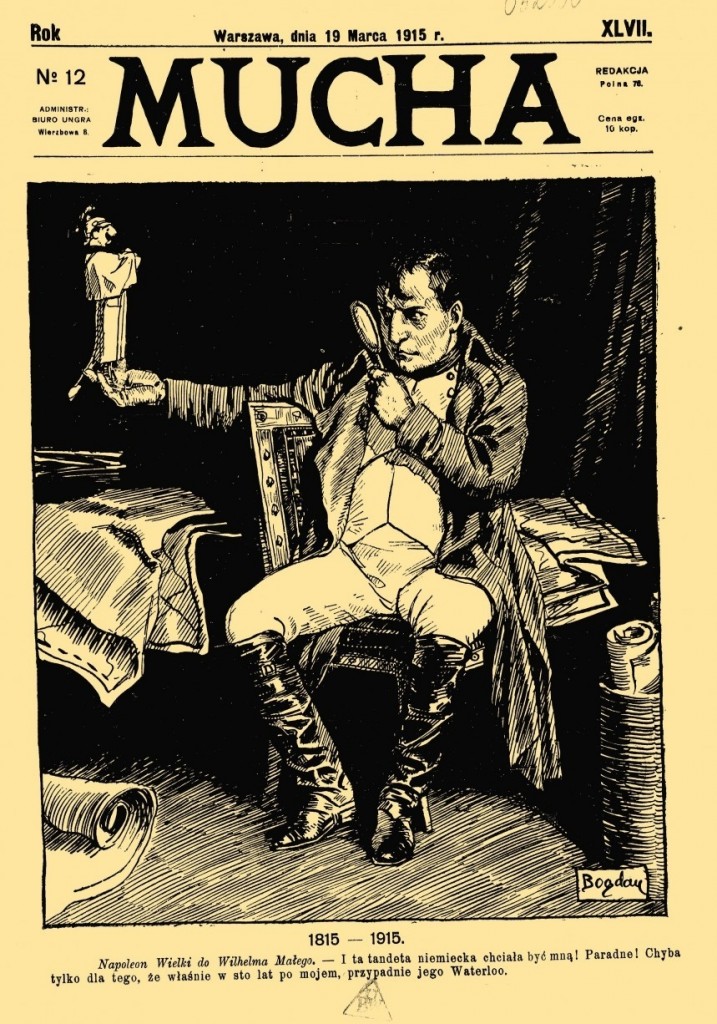 Bright comments on current events can be found in satirical periodicals one of the most important of which was ‘Mucha’ [‘The Fly’] – a weekly magazine published in Warsaw in the years 1868-1939 and then in the years 1946-1952. Numerous outstanding Polish literary figures and illustrators collaborated with it.

All the aforementioned periodicals are or will soon be available to users of the Europeana Newspapers interface (to be launched in early 2014 as part of The European Library website).

5 Replies to “Featured Partner: The National Library of Poland”