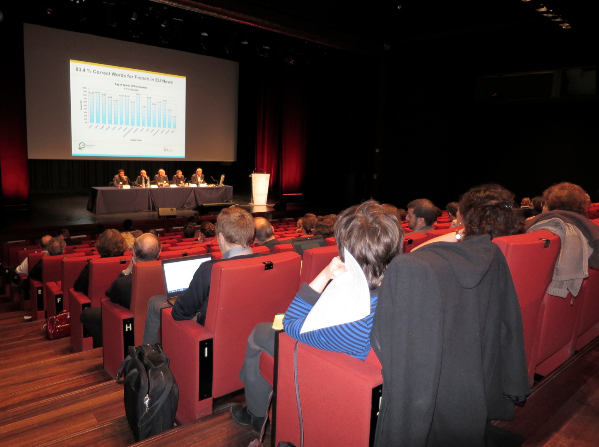 It was the tenth and final Information day organised by partners of the Europeana Newspapers Project.

The event was attended by a large audience: 88 people in total, among them researchers, librarians, digital content providers, cultural heritage professionals, IT specialists, archivists, audio-visual professionals and teachers.

The speakers at the Information day were equally diverse. Thanks to them, the audience learnt more about many aspects of the project and its possible applications. The day was also an opportunity for those within the project to gather more information on the expectations of researchers with regard to digitised historic newspapers.

The day was made up of three parts.

Round Table #1: Why Europeana Newspapers?

Moderated by Elisabeth Freyre from the BnF, this first round table set the scene for the rest of the day through three presentations, which gave a detailed view of the project, its activities and goals.

The first presentation from Philippe Mezzasalma, Head of the Press department at the Department of Law, Economics and Politics at the BnF, was entitled The digitised newspapers collections at BnF: success and limits of the first historic newspaper digitisation work. It focused on how the BnF became involved in Europeana Newspapers. See the slides.

The second presentation from Hans-Jörg Lieder, Head of the department of bibliographic services at the Berlin State Library, reminded participants of the scale of the Europeana Newspapers project. See the slides.

Ioannis Anagnotopoulos, Coordinating manager of the Europeana Newspapers project at the BnF, set out the contribution of the BnF to the project. See the slides.

He noted that Europeana Newspapers had:

The aim of the second part of the morning session, moderated by Jean-Philippe Moreux from the BnF, was to take an in-depth look at the technical innovations of the project.

Günter Mühlberger, Professor and project director at the University of Innsbruck, the university responsible for processing the 8 million pages of the Europeana Newspapers project using OCR presented How can Optical Character Recognition technology help users in their research? See the slides.

Claus Gravenhorst, Director of strategy at CCS (the company which has processed 2 million pages of the project using OLR from 5 partner libraries), then explain the work done by CCS on OLR via his presentation Optical Layout Recognition: From unstructured to structured newspaper data. See the slides.

Clemens Neudecker, Coordinator of the Europeana Newspapers project at the Berlin State Library, then presented Development of Named Entities Recognition for French Newspapers. See the slides.

Alaa Abi Haidar, Researcher in data mining and complex systems at the BnF and the LiP6 laboratory, rounded off this session with a presentation that focused further on the purpose and applications of Named Entity Recognition. See the slides.

Round Table #3: What are the uses, practices, and expectations for the users?

With the afternoon session, the focus was put on the use of the digitised corpus in the project and the expectations of users. The session was moderated by Marc Minon, director of Cairn which is a platform for French-speaking periodicals.

This round table aimed to explore how the digital environment has changed the work methodologies of researchers, and to show what role Europeana Newspapers can play in this changing environment through the experience of the following speakers:

All attendees received promotional materials, including a leaflet about the project and a promotional postcard printed with a French newspaper. Both were provided in French.

Overall, the day was rated a success by those who attended. A survey circulated after the event showed that over 90% of participants rated the presentations as Good or Very Good, and said they intended to explore the content made available by the project.

The event was mainly aimed at a French speaking audience and a translation service from English to French was available. The whole event was also recorded on video and will shortly be made available on the BnF website.