Five partners from the Europeana Newspapers Project travelled to Munich on June 26th for a workshop at the LIBER 2013 conference – a major gathering for library professionals from around the world. The workshop was attended by 30 people. Through a series of presentations, the participants were introduced to the work of Europeana Newspapers and learned about best-practice techniques related to the refinement and enrichment of digital newspapers. 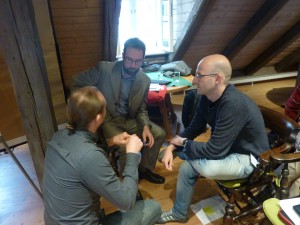 The workshop was based around three types of activities:

Presentations
Marieke Willems from LIBER opened the workshop with an introduction to Europeana Newspapers and the structure of the workshop.

The survey is now being re-conducted, to allow more libraries to share their experience with newspaper digitisation. Add your voice.

The third speaker was Clemens Neudecker from the National Library of the Netherlands. He presented and explained many technical aspects of the project, including the complex refinement processes being used, the tools that were created specifically for the project and the development of Named Entity Recognition (NER) in four languages for newspaper content.
Stefan Pletschacher from the University of Salford spoke about “Digitisation Workflows and Evaluation Approaches”. In order to create a good user experience, Pletschacher said it was critical to have a clear idea of difference use-case scenarios and the how various features such as layout analysis, reading order detection and text recognition would be used.

The final workshop speaker was Günter Mühlberger from the University of Innsbruck.

He spoke about the ENMAP metadata profile being used by the project. A public version of this profile will be available in October. Mühlberger said that ENMAP provided a practical solution for coping with different data formats, and that this was important for a project aiming to create and make vast amounts of digital data accessible. He finished his presentation with food for thought on structural metadata: what is a headline, an advertisement, supplement or an opinion section? 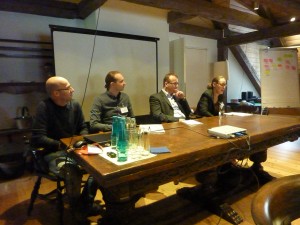 The second part of the workshop was moderated by Alastair Dunning. On the panel were two of the speakers – Clemens Neudecker and Stefan Pletschacher – along with Birgit Seiderer (Bavarian State Library) and Tomas Foltyn (National Library of the Czech Republic).

The discussion started with the question: “Do you give the institutions a copy of the re-processed data?”. Neudecker confirmed that this was the case, and added that the workflow of the project also allowed libraries to evaluate old and new results after processing.

Other topics raised during the discussion included: 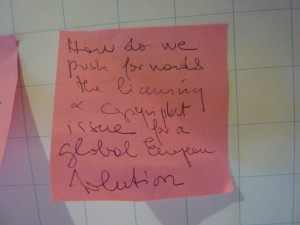 The final question concerned the difficult field of copyright and personal rights for 20th century  newspapers. It was noted that the issue of rights is handled very differently across Europe, and that examples from Norway and Switzerland show that newspaper publishers are ready to cooperate with libraries to make more recent content available.

Further Workshops
The Europeana Newspapers Project will hold two more workshops, where you can learn more about the work we are doing with digital newspapers.

One Reply to “Sharing best practices with library professionals at LIBER2013”